My cousin is amazing. She is one of those rare people who is successful doing something creative that she loves. She found niche in punk baby clothes and it has taken off. Check out her AMAZING web store mybabyrocks.net and you will be amazed as I am. She started with a toy screen printer in her bedroom people! And now she is official, big and bad.
Lily was a model for her recent photo shoot. Here are a few of the shots Andrea took of her. We had so much fun hanging out with Andrea, checking out the new warehouse and seeing the inside of My Baby Rocks. 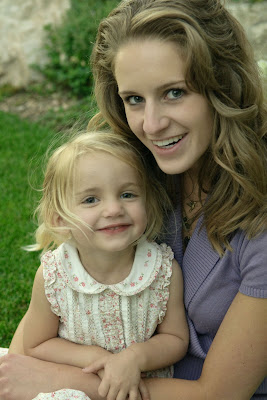 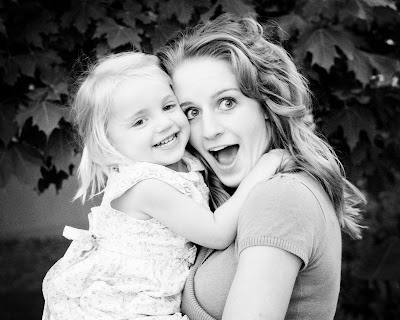 Lily loves my sister. How could you not love the Toad. She is amazing, beautiful, talented and kind. We love you, Tori. 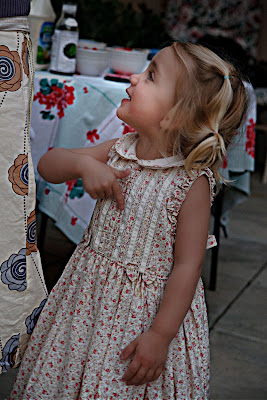 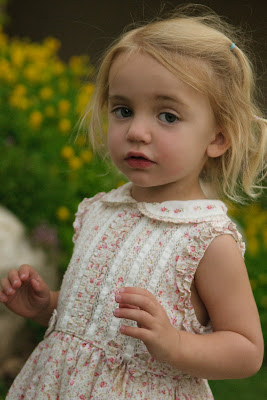 I haven't seen the new Harry Potter flick yet, but this might satisfy me until I can.

The kitchen. . .and more 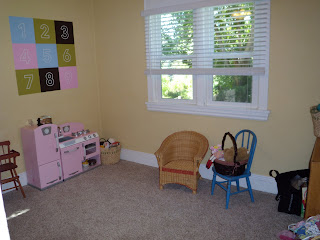 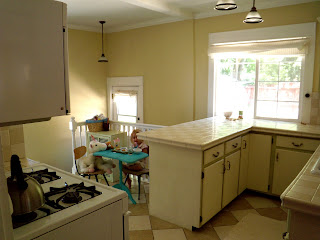 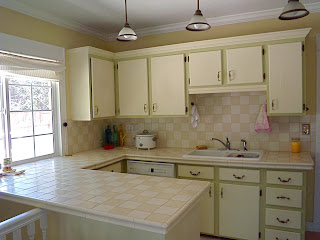 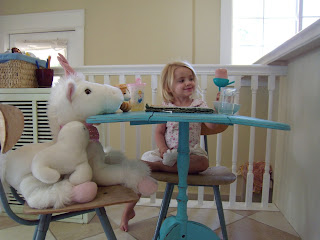 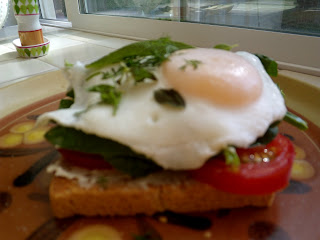 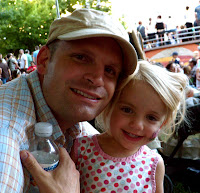 Music makes us happy. Lily sings at the top of her lungs almost all day and I love it. You could even say that music is what brought our family together. In college, I had a friend in a physics class. One day when I wore a t-shirt with a somewhat obscure band name on it he said "hey, my friend listens to that band, you have to meet him" and the rest is, as they say, history. Chris and I still love hearing live music whether it be on our living room "stage" with Lily singing "Families and Lions Can Be Together Forever" ("you liked that part about lions right mom?" ~ Lily) or with 7000 others at the free concert at the Gallivan Center this past Thursday. We often kick ourselves for leaving a good thing behind us in Hawaii but at moments like this, hearing great bands like Bon Iver and Jenny Lewis (of Rilo Kiley) FOR FREE while munching on fresh bread, apricots and cheese from the farmer's market, we are lovin' the mainland. 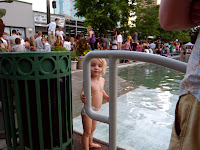 People watching at this show was almost as great as the music itself. There were all types, including lots and lots of kids! Lily didn't hesitate to strip off her dress and jump in the fountain with the other kiddos and swim until her pull-up (we weren't risking the porta-potties that time. . .) outweighed her and I refused to let her be naked in the water (This ain't Hawaii sistah!). Others, adults, jumped in clothed and swam to the sweet falsetto that is Bon Iver. . .until being kicked out by security.

Friday night Chris, myself, my brother Richard, sister Alyssa, Alyssa's boyfriend and my brother, David and his friend went to see the Utah Symphony at Thanksgiving Point as part of their outdoor summer concert series. It was amazing. Richard and I made infinite oboe jokes (my rock-n-roll brother also plays the oboe, if you didn't know. . .my favs being Hoboe Playah and Reed it and Weep, both future t-shirts) and enjoyed Copeland and Suza classics as well as some Benny Goodman, and a new piece featuring a "cell-phonist". The Symphony took popular cell ring tones, punched in dramatically by the hilarious cell phonist and took the melody as the theme. It was hilarious. I think Tori might have thought about joining band in high school if she could have had a cell phone!
There were SO MANY PEOPLE at the Symphony concert that we took our time walking around the beautiful (but dark) gardens while the crowds filed out. Richard planned out how he may be able to live at the gardens, undetected, as we explored the waterfalls, foot paths and bridges. We planned a whole urban Man vs. Wild. Coming soon to YouTube. . .
It seems my daughter comes by her skinny-dipping tendencies naturally. Richard jumped in one of the garden ponds before we left.

You wanted some pictures, so here you go. Not all rooms in our house are, shall I say, done? We don't have a lot of pictures on the walls and we don't have everything just how we like it. It will get there, though. Maybe I will get brave and photo some of the works in progress. For today, here is the main room, or GREAT room. . .hee hee. 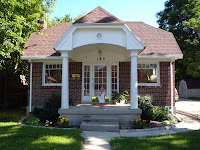 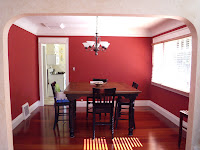 The dining room. Someday we will have some art or mirrors or. . .something on the walls. 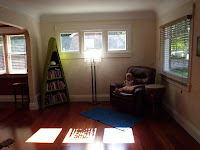 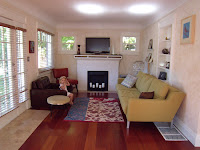 This is the front room. It is a long, narrowish room so you get it in parts. We have a main sitting room and then the armchair on the other side. It is kind of weird because it is so long and narrow so we have two separate sitting areas. What do you think? 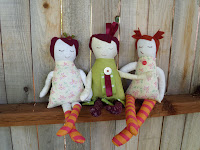 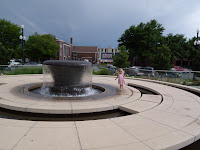 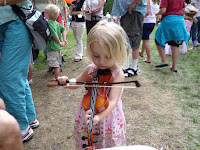 Salt Lake Arts Fest. We had a great time. Lily even got to play a real violin. She was in heaven. She took much longer than her turn. 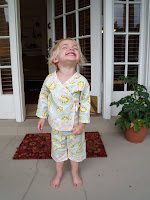 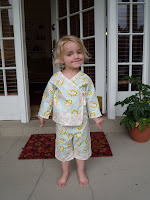 Some little jammies I made for a little baby. . .too bad they fit Lily so well. The baby got something different. . . 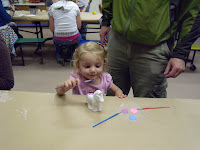 Every year my family goes to Aspen Grove family camp. We had a great time this year. It was a little rainy but we still had a great time in the beautiful Utah mountains. It is weeks like this that I feel good about moving here from Maui. Lily loved painting this Moonicorn at the arts center. 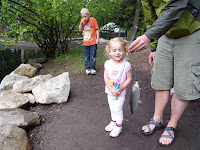 We loved having Chris with us the whole week. Lily loved fishing (good thing David was there to clean the fish. . .I swear if times got bad I would have to kill the game for our family, and that is sad) and even ate the trout for breakfast. 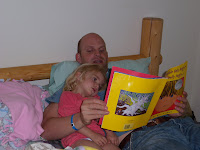 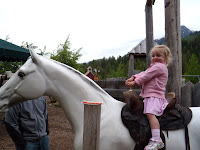 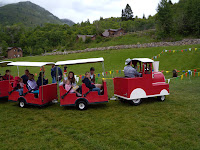 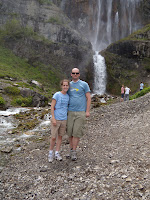 We loved all the available babysitting and took advantage of our time alone for a little hike. 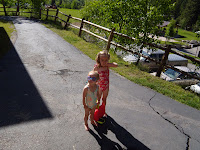 Lily loves my little cousin, Anna. How could you not? She is adorable! 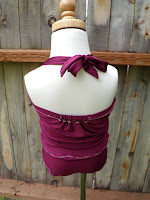 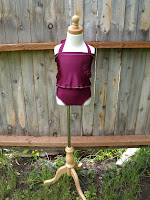 And finally, my latest sewing endeavor has been swimsuit making. It is something I have wanted to make even before I had a sewing machine. Trust me, even ask Claudia, she can vouch. This little one was the latest swap I sent out to Boston. I have been sporting my own swimsuit at the local pool and have gotten several compliments. You won't see it here, however. There are few things in life that cause you to come face to face with your own insecurities more rashly than sewing your own swimsuit. Posting pictures of yourself on your own blog in that swimsuit is one of them. It is navy, it is retro, it is fabulous and it is only a tiny bit too small.