We had so much fun in Utah. One of the most fun things I did was have Mindy take pictures of Lily. I only found out recently that she is AMAZING and will be starting her own business! She is inspirational. It always amazes me when people I already think are pretty much perfect turn out to have hidden talents! Here are a few of the pictures from our shoot. If you knew how difficult Lily was being during this then you might appreciate these even more! 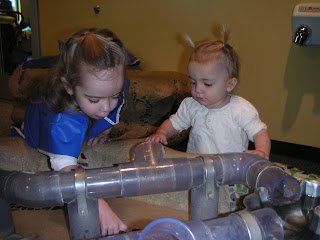 Lily and my cousin, Anna at the Discovery Gateway children's museum. 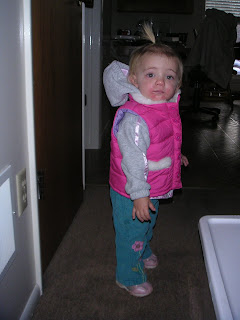 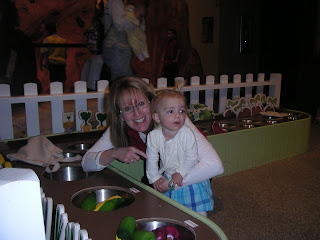 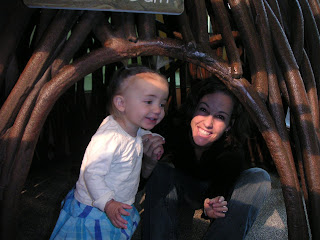 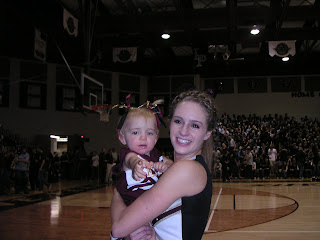 Lily as a cheerleader at the Lone Peak vs. American Fork HS BB game (AF is big rival to LP). Tori had a great time showing off the cheer baby. She did a great job tumbling too. Lone Peak killed AF!!!

Last night I checked off one of my New Year's Resolutions which is to play at an open mic night once a month. I haven't played guitar in public since I moved here and I recently started missing it. I also noticed that because I don't have a reason to play, I don't. I haven't written many songs and I hardly ever play at all. I decided I needed motivation. I found a cute little bistro/wine bar that has open mic night three times a month. I am going to play at least one of those each month and get myself back into playing the guitar.
My biggest fear and the reason it has taken me over three years to clear this hurdle is that I wouldn't like playing without Erin and Alisha. No we weren't the Dixie Chicks, but Blithe had its day in the sun and I LOVED it. I loved playing with those girls, I may even to so far as to say that it was the most fun thing I have done (aside from wife and mother). I was afraid it wouldn't be fun alone. And I was convince I would be terrible without them. Anyone who saw or heard us play can testify that it was the harmonies that made us special. Without that? I wasn't sure.
Last night I played three songs. The first went hooooorrrrribllly. I couldn't remember the words (it was Sarah Harmer's 'Hideout') and just kept singing the same verse over and over then the chorus. I played all the wrong chords and well, yikes. I don't think it really mattered, though, because no one could hear me. The mic wasn't really great and I didn't sit too close.
Next I played Chris' tune 'Wet Windows'. That went much better. I had only planned on (and thus practiced) playing one song so the first two were surprises to me that I haven't played in years. Really, YEARS.
Last I played a new song, 'Lines' that i wrote. This one I felt good about. I still don't think I was loud enough. The sound guy kept turning up the volume then there would be feedback. I didn't care, though, at least I remembered the words and didn't screw up the chords too badly. It was fun to play that song.
All in all I can say I had a good time. It was fun to hear everyone else play, too. I wish I could have stayed for the whole thing but with a baby that wakes up at 5 am, I best be in bed by 9:30 or else!
I have decided there will be a next time but I will practice more before hand. "be ye prepared and ye shall not fear" or something like that.

Ticket To or From Paradise

This is where I was today

This is where I will be Thursday


After suffering lengthy and pitiful grandchild withdrawal during the holidays my mother couldn't take it one more minute. She traded her frequent flier miles to get me a ticket so I can bring Lily to her. My mom wasn't able to come to Hawaii and I was missing the whole family so it worked out well. Chris is going to be in Dallas part of the time anyway so now I won't have to be alone. . .he will. . .sorry Chris.
As excited as I am to see my family, the scars of last winter still burn hot. The nebulizer, the days and days housebound with sick baby. The swearing up and down that I will never, ever return to the tundra. But here I am, Utah bound in the dead of winter. I am nervous about the cold but at least she is older now. Who takes their two month old thousands of miles into the dead of winter? I do. I can only hope that this trip is a happier one.
I took Lily to the beach today so we could get our fix. It was amazing. I always think "why don't I come everyday?" but then I remember that gas is closing in on $4 a gallon and that answers my question. It was a perfect beach day. . .but I forgot my camera!! Lily played her usual 'scam the beach toys from the tourists' game and made friends with a brother/sister team who were building a pool for the ocean to fill up. She had a ball running up and down the beach and chasing the tide. At one point she face planted in the dry sand and her entire face was covered in sand. Just her eyes (that she closed milliseconds pre-face plant thank goodness!) were sand-free. That would have made a great pic. As I took her naked, sandy body into the clear water I stepped in a little hole and we both went down. Not being as agile as I once was with my two bum knees I had no hope against the divot in the sand. It must have looked hilarious but it was a little traumatic for Lily. She goes underwater all of the time but usually with good warning and not at 1000 miles an hour as her mother is clotheslined by the thigh-high water. At least all the sand got washed off and she didn't cry for long. Interesting that she wasn't bothered at all by the sandy face plant.

The More the Merrier 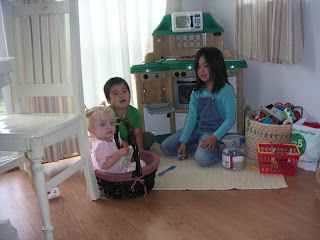 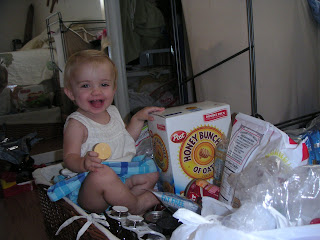 The last couple of days I have been helping a new girl (she is my same age so I refuse to call her a 'lady' that just sounds old) in our ward with her kids during the holidays (schools are closed but they still gotta work!). Breanna is six and TJ is 3. It was pretty fun having more kids and having kids that were old enough to do some fun projects with. Lily loved having the big kids to play with.
My favorite thing that TJ said was "I am half Japanese, that is howcome I can speak Spanish." My least favorite thing he said was the "F" word.
THe other picture is Lily in one of the food storage baskets. The kid LOVES to get into boxes, baskets and small containers. Surely her delay in exiting the womb was an early example of this.

Lily's hair has grown so long that her bangs hang in her eyes. Luckily she is a good sport about letting me put her locks in little pony tails or clips. At some point in the day, however, she pulls them out and the resulting quaff is always pretty hilarious. Today the resemblance to Project Runway's Christian was uncanny. 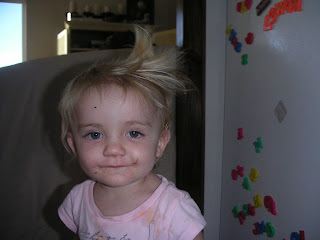 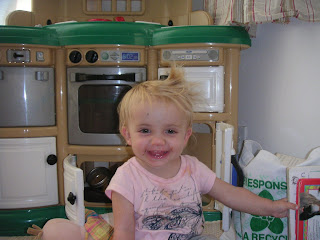