I have been babysitting, driving carpools, and being (their words not mine) a nanny A LOT lately. A lot a lot a lot a lot a lot a lot. I actually have not had a day with just Lily and myself (besides Saturday/Sunday) in over two weeks. I love kids and I love having friends for Lily but it has been a little too much lately. I think it really became clear to me today when I pulled up to my friend's house today (with extra kid in tow) and saw her minivan for sale in her driveway. For about ten seconds I really wanted to buy it.

That is what this little girl is. The new, nicer Spice Girl. This is my BFF's daughter, Addi and I know, Angi that I am totally stealing this from your blog but I have not stopped smiling since I read it and just thought it would be a beautiful Monday post.

I guess Addi always sings to herself (sometimes in the vain of "Miracle Idol") but the other day she actually came up with a real song and here it is: Sing it to the tune of your own feminist heart.

I am crazy because I'm a lady
I am a girl, I 'epresent the ladies
and I have a tea set
I am a girl and a lady
I'm a girl who's got a brain.

When they make the TV drama/comedy based on my life, besides having Kristen Bell play my character, I hope they use this song as the theme. I can only hope to be able to live up to Addie's creed. This week I am going to start by working the tea set. And using my brain.

Sugar and Spice (aka Addie Wood)

New Beginning or A Sweet Disaster

On Friday Kalei Kubota was baptized. I wish I had a picture but I left my camera in the car (I actually brought it from home but then wrestling with a toddler. . .yeah). Kalei's (Kah-lay) family has been inactive for years. I am not sure if her stepfather is a member of the church. I think not. Her older sister, Hoku, is a senior this year. Last year Hoku attended the SOAR program at BYU Provo. This is an ACT prep week for multi-cultural students. Hoku came away with much than a better understanding of standardized tests. She realized that she wanted what so many of the other students at SOAR had. The Gospel! She told me once that the other students in the program had a direction, a purpose and a comforting light that she craved. This is coming from the student body president of Kamehameha School Maui (private school for Hawaiian heritage), a 4.0 student, a nationally ranked female wrestler, a girl who started a mediation program at her school, I could go on and on. The girl had drive! She had direction. But I think that is also what helped her to go for the gospel so whole-heartedly. Once she had that desire instilled at SOAR she started meeting with the missionaries back on Maui. Then she started coming to church, mutual, firesides, etc. Now she is my Laurel President and is one of the most awesome people I have ever met. It has been a goal of hers for a while now to have her younger sister, Kalei be baptized and to have the rest of her family reactivated in the church. I know the happiness that I felt at Kalei's baptism was only a fraction of what Hoku must have felt. It awesome to see them at church and at mutual. Their mom, stepdad and brother have also been coming to sacrament meetings for several weeks now. They are such a gorgeous, amazing family. I just can't say enough good things about them. I just had to share.
It is times like this (and they happen more often than not) that I am so happy to be in Young Women. When I was first called as president (at 24 mind you) several of the Laurels were coming to my house to borrow clothes after school. I thought "how can I lead these girls, this is going to be disaster!" then I got over it. Then I got pregnant. I thought for sure that they would release me when I had the baby. In fact I planned on it. Really, I PLANNED for it. When I wasn't released I thought "how am I going to lead these girls with a new baby, it is going to be a disaster!" then I got over it. And it hasn't been a disaster. I don't do everything right, I don't even do everything well. But I love it. I love the girls. Now, if they ever do release me, I might cause a scene. It might even be a disaster.

Lily, who normally will not wear a bib for more than three seconds decided she wanted to make up for lost time today. While folding laundry (me, not her) she decided she wanted to wear her bibs. All of them. Then she wanted to have Stella, her doll, wear all the bibs. Then Lily again. Then Lily wanted a towel around her waist also. Silly girl played like that for quite some time. The other pictures are of her first painting experience and a quick guava snack on our hike yesterday. 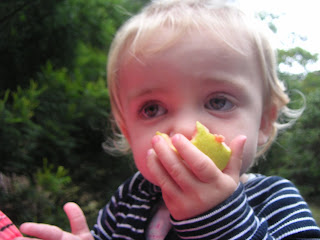 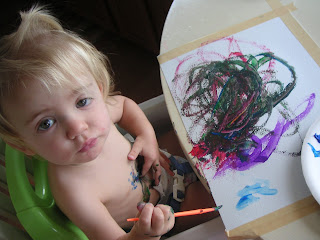 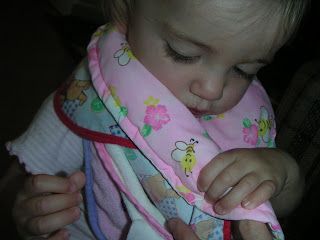 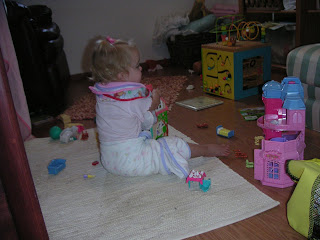 Lily had a friend today, Zinnia. They were two little flowers and both so sweet! Here are some shots from their fun pool party. 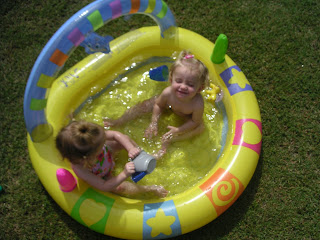 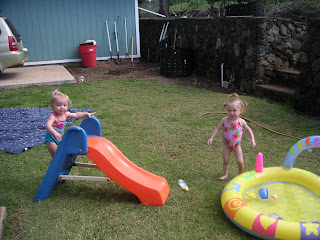 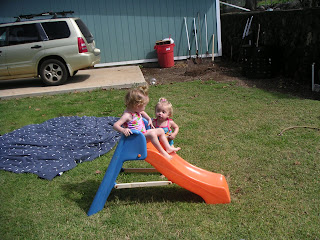 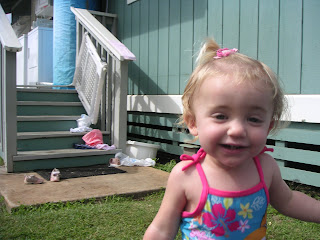 Thats right MANday. Thanks to Claudia and Adam for their input. I have to echo their opinion that there are much more obvious choices for women songs. That being said, I have come to the conclusion that the definition of Man Song is in the mind of the beholder. That makes zero sense. You understand my point.
I came to this conclusion in Sunday school. It was the first Gospel Doctrine class I have sat in in months. I am usually in the halls with Lily. We were discussing 2 Nephi and my group was given the following:

I couldn't believe the serendipity! Not 24 hours post Man-post and my question will be answered! And from the scriptures no less. Of course we talked about the true definition of a man being one who holds integrity, the priesthood, and virtue of highest priority. I guess then, that the most manly of all songs would be 'Nephi's Courage' from the primary songbook. I guess you were a little off base with 'Paradise City', Adam. Sorry.

Spiritual stuff aside for the moment. I have sad news this Music Monday. As many of you have heard (and by 'many' I do mean 'both') The Format, one of the best (in my opinion, which on this blog is doctrine) pop bands of recent history, broke up on Feb. 13. In honor of them, and their great songs together, I am going to dub this video the most manly of all videos. It is of a less spiritual nature but still, no one can deny the masculinity of boys in sweeping haircuts (it's bringin' me down) taking pictures of themselves. I really have to hand it to these guys for this one.
Meg

WARNING: There is a "bad word" toward the end of this song, so if you are planning to watch with your little one in the room, maybe wait until nap time. Or, just watch the first minute. You can still get the idea and avoid any inappropriate parroting.

Yes it has been awhile. I am sorry. I must admit I have been hesitant to post anything above the pretty pretty pictures that Mindy did. There really is something to be said about digital retouching. She really is an artist. I mean, sure I think my kid is cute, but come on! Those pictures make her skin glow. These next ones do not. They showcase the rashy non-glow that is her actual self. Poor kid has sensitive skin bless her! Here she is in all her rashy goodness. 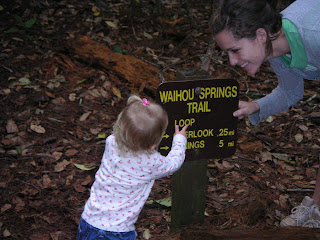 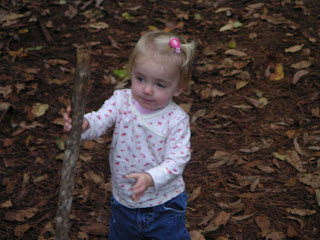 The other day I had the privilege to babysit the resident ward 'heathen' for the day. This kid has a reputation for bullying, yelling and various other mischief including threatening to shoot the other members of the nursery. Of course he comes from one of the best families in the ward. At my house he was pretty much a perfect angel but he did say some classic lines.
When he first came in, Lily was playing with her doll house. Kaia came and sat next to her and I said:
"Kaia, would you like to play with the dolls?"

Kaia picked up two of them and said:

"Yes. This guy punches this guy so then this guy hits him back and then the guy falls down because he has a bloody nose."

Me: "Oh, we don't play like that at my house. They mostly just kiss each other or play ring-around-the-rosie. That is what Lily likes to make them do."

At one point I asked if they would like to listen to some music. Kaia said that he would so I asked if he wanted soft songs or silly songs. He said he would like "Man songs." This got me thinking. What are Man Songs? I mean there are the obvious: The Piano Man, Nowhere Man, and Rocket Man and the score of Music Man. Then there is the Spiderman Theme song and dunnadunnadunnadunna BAT MAN. . .the Batman song. But what makes a true man song? I would guess that it either by lyric or riff has to exemplify true masculinity. I have to tell you, I am still stumped. The first hit upon googling 'Man Song' didn't help either. Funny Youtube stuff (esp. the Harry Potter one. . .which I will not post here but it is easy to find) but nothing that really defines it. So, I am opening it up for discussion. What makes a 'Man Song' and more importantly, what songs fall into that category. Better yet, what is the most manly of songs? I need help so that next time I don't have to play "Mind your Manners and You'll Be Fine" which, while teaching valuable social norms, does not, even by my feminist views fall under 'manly'.

Let me know (both of you who check this regularly) and maybe I will bring back Music Monday in masculinity. Grrr.